Have you ever been rudely awakened in the middle of the night by the loud crowing of a rooster? If so, you’re not alone. Many people who live near or own roosters have experienced the surprise of hearing a rooster crow at seemingly odd hours. But why do roosters crow at night, and is it normal behavior?

Roosters crow at night to alert the hens to seek cover from potential predators and to let the predator know that a rooster is guarding the flock. The presence of actual or perceived predators can trigger a rooster to crow.

The Biology Of Rooster Crowing 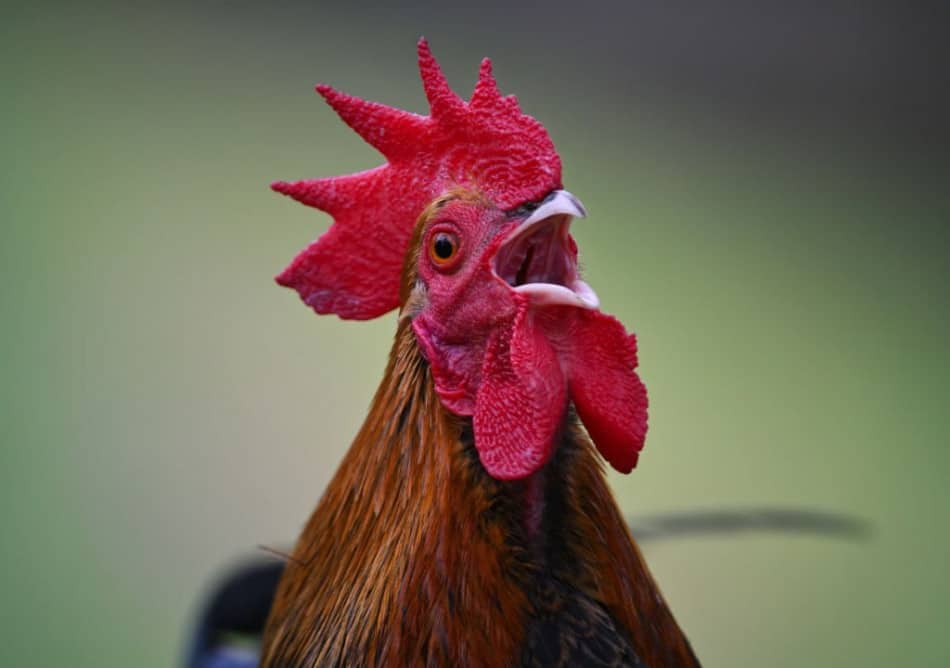 Roosters are known for their iconic crowing, which typically occurs at dawn and serves as a signal to other members of the flock that it is time to wake up and start the day. But have you ever wondered why roosters crow at night, or even at seemingly random times throughout the day?

While it may be surprising or confusing, there are actually several factors at play when it comes to rooster crowing behavior.

One important factor to consider is the biology of roosters and their built-in biological clock. Like many birds, roosters have a circadian rhythm that helps them know when it is time to wake up and go to sleep. This rhythm is influenced by the presence or absence of light, with the hormone melatonin playing a key role in regulating sleep.

In the morning, as the sun begins to rise and the light levels increase, the production of melatonin decreases, which signals to the rooster that it is time to wake up and start the day.

READ  Do Roosters Have Balls: [Testicles]

In addition to the role of light in regulating rooster crowing behavior, the hormone testosterone also plays a significant role. Testosterone levels in male roosters tend to increase in the morning, which can lead to more crowing behavior as a way of establishing dominance and attracting females.

This behavior is often more pronounced in the breeding season, when roosters are particularly motivated to attract mates.

So why might a rooster crow at night or at seemingly random times? There are a few possibilities to consider. One possibility is that the rooster’s internal clock has been disrupted by artificial light or changes in the environment. Roosters are sensitive to light and may become confused if they are exposed to artificial light sources at night or if their environment changes suddenly, leading to abnormal crowing behavior.

Another possibility is that the rooster is experiencing stress or excitement, which can trigger crowing behavior. For example, a rooster may crow at night if it perceives a predator in the area or if there are changes in its social hierarchy.

Roosters can also become agitated or excited by loud noises or other stimuli, which may cause them to crow at unexpected times.

Understanding the biology of rooster crowing behavior can help us better understand why roosters crow at night and at seemingly random times, and may also offer clues for how to minimize this behavior if it becomes a problem.

Factors That Can Cause Roosters To Crow At Night

As mentioned in the above, there are several factors that can cause a rooster to crow at night. One possibility is that a rooster’s internal clock, or circadian rhythm, may be disrupted by external factors such as artificial light or changes in the environment.

For example, if a rooster is exposed to bright lights at night or experiences a sudden change in temperature or humidity, it may become confused and begin crowing as if it were morning.

Another reason a rooster may crow at night is due to stress or excitement. Roosters are social animals and can become anxious or aggressive if they feel threatened, such as if they sense the presence of predators or if there are changes in their social hierarchy.

This can lead to increased crowing behavior, including at times when it would normally be quiet.

It’s important to note that every rooster is different, and what may cause one rooster to crow at night may not have the same effect on another. Understanding the specific triggers for a rooster’s crowing behavior can help in preventing or reducing it.

In the next section, we’ll discuss some tips for minimizing a rooster’s crowing at night.

How To Prevent Roosters From Crowing At Night

If you’re a chicken owner, you may have experienced the loud, early morning crowing of a rooster. While it may be charming during the day, it can be frustrating and disruptive if a rooster is crowing at night. If you’re looking for ways to prevent your rooster from crowing at night, there are a few steps you can take.

One of the most effective ways to prevent a rooster from crowing at night is to maintain a consistent light/dark schedule. Roosters, like many birds, have a built-in biological clock that helps them know when it is time to wake up and start the day.

By providing a consistent light/dark schedule, you can help regulate the rooster’s internal clock and minimize crowing at night.

Another way to prevent a rooster from crowing at night is to minimize noise and other potential stressors. Roosters may crow at night due to excitement or stress, such as the presence of predators or changes in their social hierarchy.

By limiting noise and other potential stressors, you can help reduce the likelihood of a rooster crowing at night.

Finally, it’s important to ensure that your rooster has plenty of space and resources. A cramped or resource-limited environment can lead to stress and crowing at night.

By providing your rooster with plenty of space and resources, you can help reduce the likelihood of crowing at night.

In conclusion, it is not uncommon for roosters to crow at night due to a variety of factors such as disruptions to their internal clock, stress or excitement, and changes in their environment. While this behavior may be surprising to some, it is important to understand the underlying causes in order to address and minimize it.

By providing a consistent light/dark schedule, limiting potential stressors, and ensuring the rooster has ample space and resources, it may be possible to reduce the frequency of night-time crowing. Overall, understanding the biology and behavior of roosters can help us better care for these fascinating animals.