Hay bales are made by cutting and drying hay in the field, then gathering and compressing it into bales using balers such as round or square balers.

From cutting and drying the hay in the field to shaping and storing the bales, there is a process involved in creating these necessary resources for farmers.

In this blog post, we will take a closer look at the steps involved in making hay bales and the impact of proper timing and storage on the nutritional value of the hay. So, let’s dive in and discover the answer to the question “How are hay bales made?” 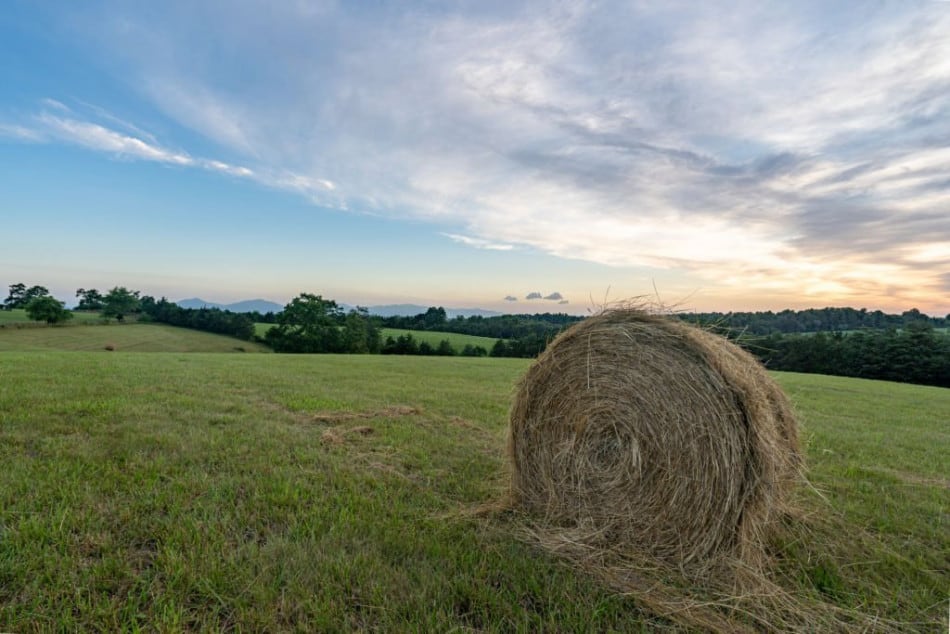 Harvesting the hay is the first step in the process of making hay bales. The process typically begins with cutting the hay using a mower or a sickle bar mower. Once the hay is cut, it is left to dry in the field for several days, a process known as “curing.”

The timing of cutting is critical to the nutritional value of the hay. If the hay is cut too early, it will not have reached its full growth potential and will not be as nutritious.

On the other hand, if it is cut too late, the hay will be too mature and will contain more stem and less leaf, which decreases the nutritional value. Ideally, hay should be cut at the “boot stage,” when the seed heads are beginning to show but before the seeds have fully formed.

After the hay has been cut and left to cure, it is then raked into windrows, which are long rows of hay that allow for better air circulation and faster drying.

It’s worth mentioning that weather plays an important role in the curing process, if it rains or the weather is too humid, the hay will not dry properly and can get moldy, making it useless for animal consumption.

After the hay has been cut and dried in the field, it is then gathered and prepared for baling. The process of shaping the bales involves using specialized machinery called a baler. There are two main types of balers: round balers and square balers.

Round balers are typically used for hay and straw, and they create cylindrical bales. The hay is fed into the baler, where it is compressed and wrapped with twine or netting to hold it together. This type of baler is ideal for farmers who have smaller fields or who need to make bales quickly.

Square balers, on the other hand, create rectangular bales and are mainly used for hay and straw. The hay is fed into the baler and compressed into a rectangular shape, where it is then wrapped with twine or netting.

Square balers are ideal for farmers who have larger fields and want to create bales with more consistent density and weight.

Both types of balers have advantages and disadvantages, and farmers often choose the type that best suits their needs based on factors such as the size of their fields, the type of hay they are producing, and the number of bales they need to make.

Round balers are more compact, easier to transport and typically make smaller bales. Square balers are typically larger and heavy, but they can make larger bales and are generally easier to stack.

Both types of balers have different features and capabilities, such as net wrap or twine wrap, depending on the model and brand.

In short, the process of shaping hay bales involves using specialized machinery called a baler to compress and wrap the hay, creating cylindrical or rectangular bales.

There are two main types of balers: round balers and square balers, each with their own advantages and disadvantages. The choice of which baler to use depends on the size of the field, the type of hay, and the number of bales needed.

Storing and Transporting the Bales

Storing and transporting hay bales is an important step in the process of making hay. Proper storage and transportation can ensure that the hay remains fresh and of high quality for the animals that will consume it.

One of the most common ways to store hay bales is in a barn. Barns provide protection from the elements and can keep the hay dry and out of reach of pests.

However, storing hay bales in a barn can also be space-consuming and may not be feasible for farmers with limited barn space.

Another option for storing hay bales is outside, under a tarp. This method allows farmers to save on barn space and can be a cost-effective option. However, it is important to ensure that the tarp is properly secured to protect the hay bales from rain and moisture.

Once the hay bales have been stored, they need to be transported to where they will be used. This can be done using a variety of methods, including trucks, trailers, and even trains.

It is important that the hay bales are properly loaded and secured during transportation to prevent damage or loss.

In addition to proper loading, it’s also important to make sure that the hay bales are protected from the elements during transportation.

This can be done by covering the bales with a tarp or other protective cover. It is also important to consider the weight and size of the hay bales when planning transportation.

In conclusion, the process of making hay bales involves several key steps, starting with the cutting and drying of the hay in the field. The timing of cutting plays a crucial role in the nutritional value of the hay, with the best time to cut being when the hay is in the early stages of flowering.

The hay is then gathered and compressed into bales using balers, which come in different types such as round and square balers. Proper storage and transportation are also important to ensure the hay maintains its nutritional value.