Farm pigs and pet pigs can eat bananas. There are some farm pigs that will even love bananas. You can even feed a pig a banana with the peel on.

Although this was a common practice back in the 70s, it might not be the best idea. If you do feed a pig a banana with the peel, you’ll want to make sure you supervise the feeding because there is a chance that he or she could choke on it. It is best to remove the peel and go from there.

When people think of nutritional foods, they oftentimes think about fruits and vegetables first. Fruits most likely, given that they are a little easier on the taste buds for most people. They are more like a sweet snack than a dinner punishment.

Apples and bananas, in particular, are two of the most popular. Not only are they easy to store, acquire, and ready to eat at any minute, but they provide immense nutritional and health benefits. 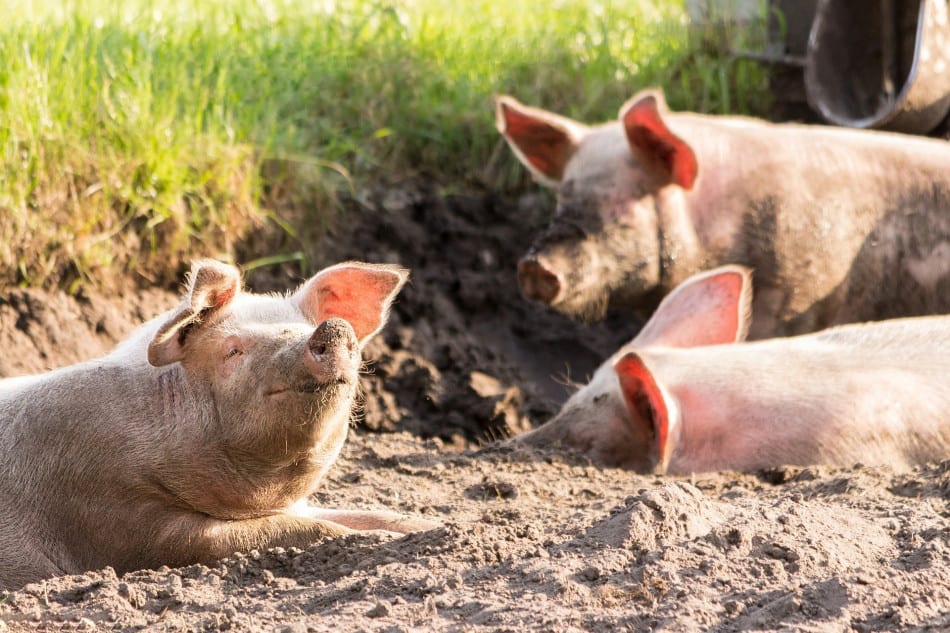 Speaking of feeding your pigs bananas, the best approach is to make sure that the banana is cut into slices and not whole, as your pig might end up trying to swallow the entire banana at once.

It has happened before and it is not pretty. Food choking can be fatal for animals like pigs due to their complex build.

Simply put, they’ll have a much harder time recovering from a severe choke as compared to a dog or cat. In the worst-case scenario, it can lead to death.

In addition to all of this, you’ll want to make sure the banana is fresh, ripe, and ready for consumption.

That being said, there is the rare occasion when pigs will enjoy the cooked banana. The only way to know for sure is to cook one up and give feeding a shot.

Another important thing to remember is that pigs have their own personalities. As time goes on these personalities will likely adapt and change. Just because a pig can eat a banana, it doesn’t necessarily mean that he will or will.

Some pigs may simply not like bananas as you may not like mangoes, but not to worry because there is a wide range of other healthy options that can nutritionally replace what the banana has to offer.

The short answer is yes, pigs can eat banana skins. In fact, they are quite fond of them! The skin is a good source of fiber for pigs, and it also provides them with essential vitamins and minerals.

However, there are a few things to keep in mind when feeding banana skins to pigs. First of all, the skin should be cut into small pieces so that the pig can easily digest it.

Secondly, the skin should be free of pesticides and other chemicals. And finally, it is important to supervise pigs when they are eating banana skins, as they may try to eat too much and choke on the tough skin.

The Nutritional Value Of The Banana For The Pig

You might be surprised to hear it, but a wide range of studies has been conducted with life stock and fruit. However, it is the pigs that have been extensively used for banana testing. One of the most interesting studies published in 1975 showed that the banana can be extremely beneficial for the pig.

They can eat bananas in both the fresh and dried forms and it’ll actually help them grow if the bananas are sufficiently ripe. It also showed that when fed green, most pigs would only consume around 50% of the banana, which can be considered a good thing on some levels. There is such a thing as too much protein.

A lot of farmers like to combine bananas with protein supplements, and sometimes this ends up being too much protein, which hurts the overall growth of the pig.

A single banana without the peel, ripe, and ready to eat from the store can contain as much as 1 gram of protein, 3 grams of dietary fiber, and 0.8 milligrams of Niacin. They can also contain other essential nutrients like vitamin C, potassium, manganese, vitamin B6, and more.

Feeding your pigs bananas is never a bad idea. In fact, it is a good one when done so in moderation. Moderation here is key because too much can actually have a negative impact on the growth of your new pet.

Make sure you are carefully monitoring and feeding your pig, as they are more susceptible to choking hazards than other types of creatures.

link to What Do Farmers Do During The Summer

Farmers are busy during the summer months! They are working hard to get their crops harvested and ready for market. But what do they do all summer long? Farmers work on different projects during...

The autumn season is one of the most important times for farmers. This is when they plant the crops, harvest the produce, and clean up their operation. By understanding what farmers do in the...

I am a young farmer who is passionate about sustainable agriculture and regenerative land management. I believe that through working with nature, rather than against it, we can create bountiful harvests that not only feed our communities but also heal the land. I am constantly learning and experimenting on my farm, and I love sharing what I know with others so that we can all reclaim our connection to the natural world.